Culture as a way of life is meant to be preserve, but sometimes that is not the case here in Nigeria and it’s a different ball game entirely because people abandoned the culture in the name of modernization . Some of the fabrics worn by the delta igbos that depict the rich culture of a part of Nigerian is the akwa ocha fabric.

Akwa Ocha is a white, woven cloth regarded as the pride of the Anioma people of Delta State. It is the traditional cloth worn and used by these people otherwise referred to as ‘Delta-Igbo’,as the name implies Akwa Ocha is “Cloth that is white or better still white cloth.”The uniqueness of this fabric is that it is an identity for a given geographical area of Aniocha, Ndokwa, Ika, and Oshimili people, but it has now transcended to other local government areas in Delta State. Anywhere you see Akwa Ocha, people know the value, they appreciate it, it is symbolic.
Akwa Ocha is a fabric made from wool and exists in wrapper, This hand-woven fabric is worn mostly during important occasions and it can last for as long as a 100 years.This fabric is worn mostly during important occasions  like weddings, marriage ceremonies and birthday parties. 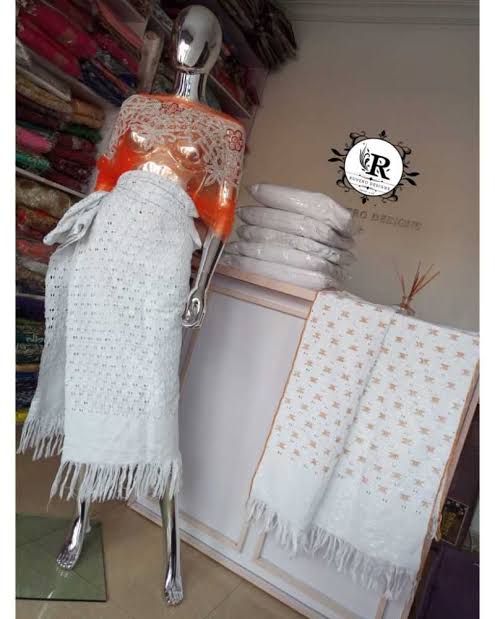 The cloth is woven by aging women as the younger generation does not involve themselves in the act because of its tedious nature.The cloth which contains surface decorative motifs and symbols is used for various festive occasions among the people. Akwa-Ocha motifs and symbols and their functions reveal the people’s history, religion, and social behaviours.
Because of the neglect in the art of making the fabric and the need to revive the rich values inherent on the fabric such as the motifs and symbols, the motifs and symbols have been used on fashion accessories with the use of different forms of materials such as calabash, coconut shells, leather, raffia and beads. This will not only represent more of our cultural heritage elements in fashion accessories, but also create an identity, express national pride as well as preserve a valuable heritage, so that the efforts to develop the Akwa-Ocha motifs and symbols by the women weavers will not go into extinction.
Modern Anioma brides style the Akwa Ocha into an elegant outfit for a stylish statement.the akwa ocha fabric meets modernity and it is been styled to suit different fashion taste.

See also  Beneficial Effects of Consuming Fruits On the Body