This is accomplished by the goalkeeper moving into the path of the ball and either catching it or directing it away from the vicinity of the goal line.

Goalie, keeper, shot stopper are other shortened terms for Goalkeepers.

As the 2020-21 football season comes to climax this week, we examine best goalies in top 7 flight leagues in football.

Although, we appreciate that the list is open to debate and we will be happy to hear from you.

Shall we? Yes we shall.

Antonio Adán Garrido is a Spanish professional footballer who plays as a goalkeeper for Portuguese club Sporting CP.

A youth product of Real Madrid, where he acted mainly as a backup, he spent most of his career with Betis. 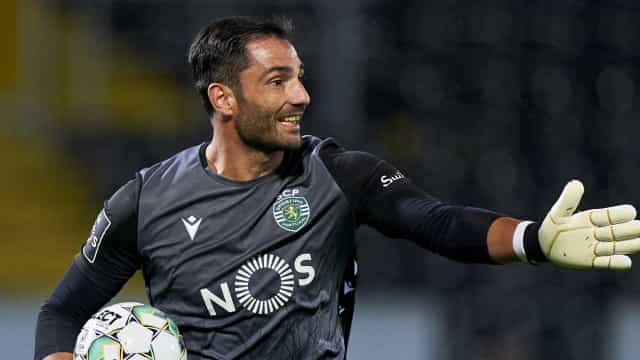 He totalled 129 LaLiga matches for those two clubs, as well as Atlético Madrid for whom he signed in 2018.

On 20 August 2020, Adán moved to Portuguese club Sporting CP on a free transfer, for two years with the option of a third.

He was a key player as they won their first Primeira Liga title for 19 years.

Adán let Sporting to glory by keeping 19 clean sheets, conceded 19 and have 5 yellow cards in his 32 appearances for team in 2020/2021 Campaign. 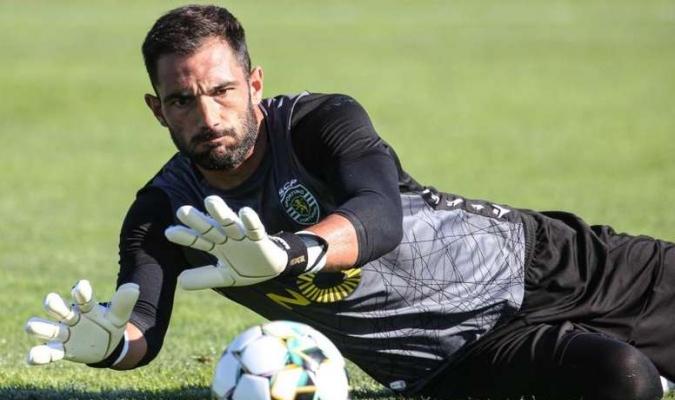 He won best keeper for three consecutive months in the Primera Liga.

Antonio Adán is surely a man enjoying his time in the goalkeeping department.

Marco Bizot is a Dutch professional footballer who plays as a goalkeeper for Eredivisie club AZ Alkmaar and the Dutch national team. 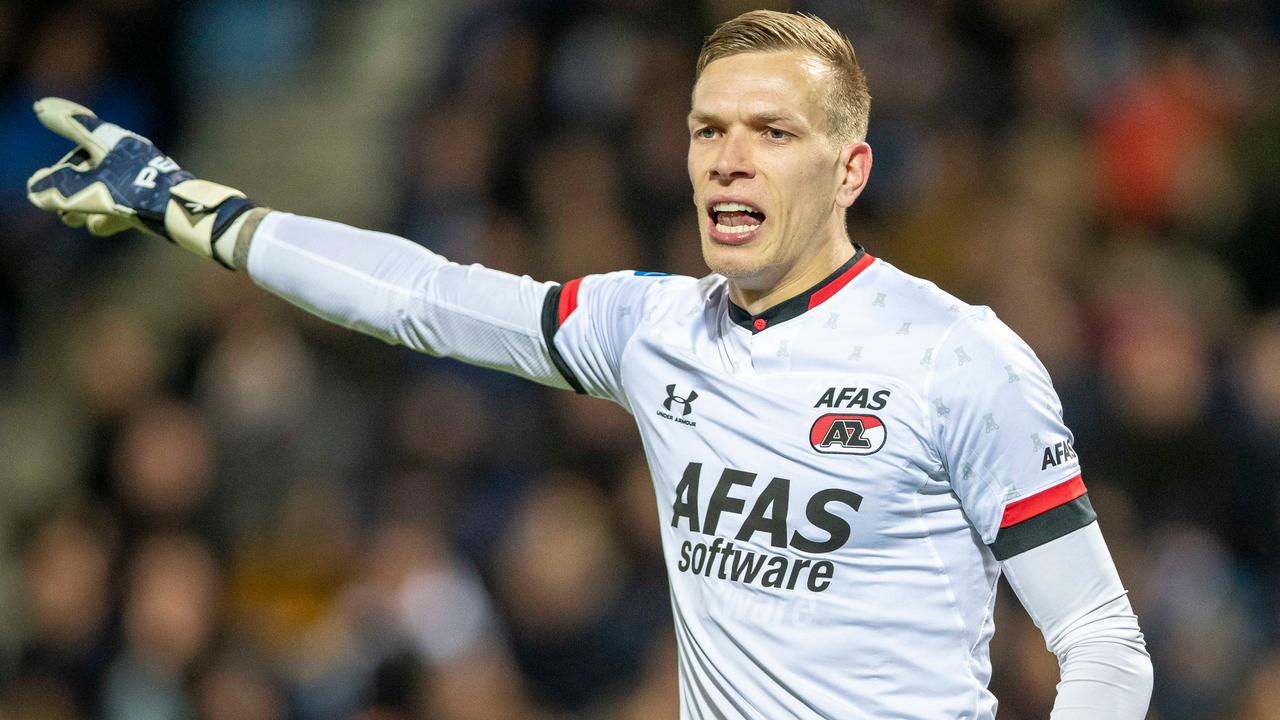 On 10 May 2017 Bizot signed a contract at AZ Alkmaar. He was picked as the replacement of Tim Krul, who returned to Newcastle United after a loan spell.

Bizot played all 40 official games in the following season and met the finals of the TOTO KNVB Cup.

After the summer, he remained consistent with the most clean sheets ever in the Eredivisie.

Bizot  has a league-high 83.58% save percentage, although helped massively by his defense however, his expected goals per shot is only 0.24. 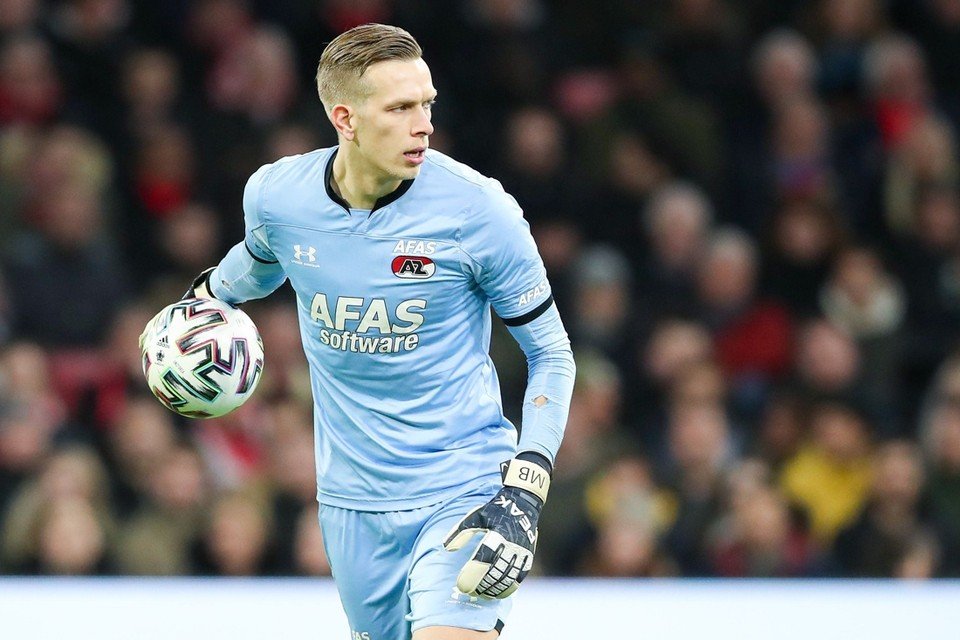 Bizot has been one of the standout keepers this season, with an incredible 17 clean sheets from 25 games.

Mike Maignan is a French professional footballer who plays as a goalkeeper for Ligue 1 club Lille and the France national team.

Maignan played for France at every level from under-16 to under-21. 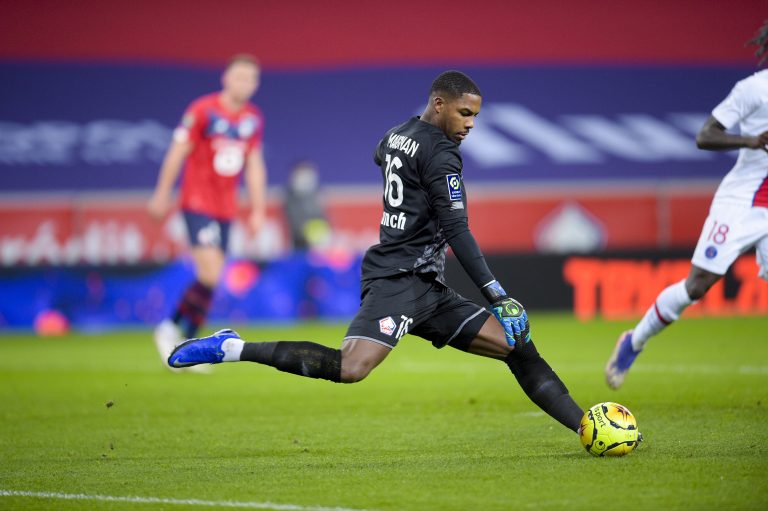 He made his debut on 7 October 2020 as a half-time substitute for Steve Mandanda in a friendly against Ukraine, which ended as a 7–1 win at the Stade de France.

Maignan came through the youth teams at Paris Saint-Germain, he was an unused substitute several times but never played.

He made his professional debut on 18 September in a 1–1 draw at Rennes, as a substitute for Yassine Benzia after Vincent Enyeama was sent off in the 69th minute.

With his first touch, he saved the penalty from Paul-Georges Ntep.

At the start of the 2017–18 season, manager Marcelo Bielsa dropped the experienced Enyeama for Maignan.

The following season, he was an ever-present as Lille finished as runners-up to PSG, and was elected Goalkeeper of the year in the Trophées UNFP du football. 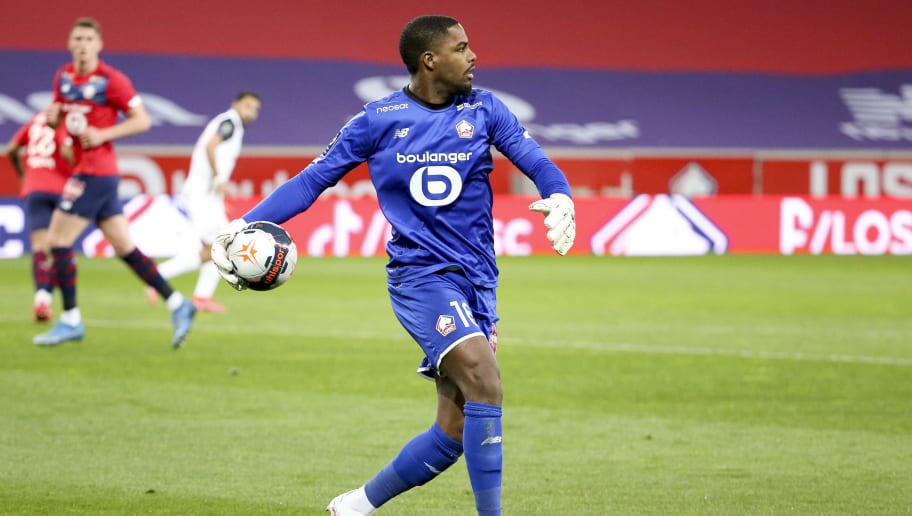 As the 2020-21 Ligue 1 season long campaign reaches its climax, Maignan will be hoping to lift the league title.

Mike Maignan as a total of 21 clean sheets, conceded 22 goals and 1 yellow card out of 37 appearances.

He will hope to increase the tally of his clean sheets to 22 as they face Angers away from home on Sunday in their final fixture for the season.

Samir Handanović  is a Slovenian professional footballer who serves as captain and plays as a goalkeeper for Italian club Inter Milan.

Before moving to Italy, Handanović played in his home country of Slovenia.

He made his debut for national team on 17 November 2004 in a friendly match against Slovakia, which ended in a goalless draw.

After series of happiness and heart breaks in his international career, on 18 November 2015, Handanović announced his retirement from the national team.

His starting position was taken over by Atlético’s Jan Oblak. 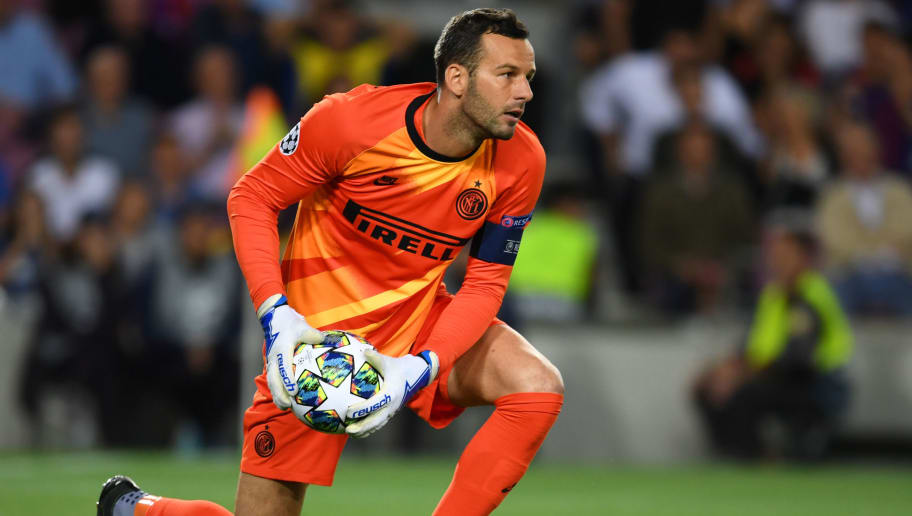 In February 2019, he was named club captain, while in September.

He made his 300th appearance for the club, and subsequently went on to reach the 2020 UEFA Europa League Final that season.

Handanović made his 500th Serie A appearance in February 2021, and won his first trophy that May by winning the title.

Nicknamed Batman, due to his acrobatic saves. He is regarded as one of the best goalkeepers of his generation.

One of only four non-Italian keepers to be named Serie A Goalkeeper of the Year, winning the honour three times.

A penalty saving specialist, during the 2010–11 Serie A season he saved a total of six penalty kicks, equalling an all-time league record set in the 1948–49 season.

During the 2019–20 season, he equalled Gianluca Pagliuca’s record of most penalties saved in Serie A with his 24th stop.

The following season, he broke the record.

Manuel Peter Neuer is a German professional footballer who plays as a goalkeeper and captains both Bundesliga club Bayern Munich and the Germany national team.

He is regarded as one of the greatest goalkeepers in the history of the sport. 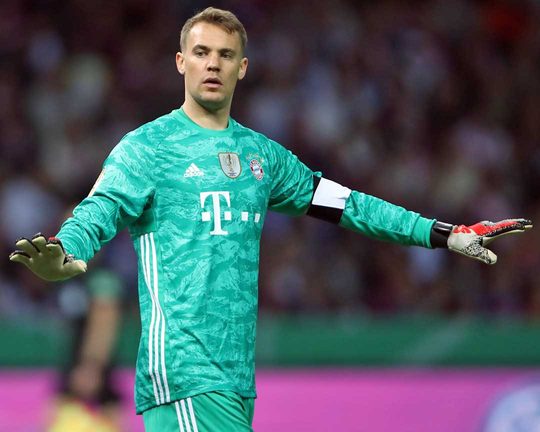 Neuer has been described as a “sweeper-keeper” because of his playing style and speed when rushing off his line to anticipate opponents, going out of the goalkeeper box.

Neuer started his career at Schalke 04 where he won the DFB-Pokal and DFL-Ligapokal.

In 2011, he signed for Bayern Munich and has since won 25 trophies, including nine Bundesliga titles and two UEFA Champions League titles.

In 2014, Neuer finished third in the voting, behind Lionel Messi and Cristiano Ronaldo, for the FIFA Ballon d’Or award.

He was awarded the UEFA Goalkeeper of the Year and the IFFHS World’s Best Goalkeeper five times each.

Neuer was selected as Germany’s number one goalkeeper for the 2010 FIFA World Cup in South Africa.

During the group stages, he only conceded a single goal. He provided the assist for Miroslav Klose’s opening goal against England, winning 4–1.

Four years later, Neuer won the 2014 FIFA World Cup with Germany as well as the Golden Glove award for being the best goalkeeper in the tournament.

Manuel Neuer has appeared in 32 matches this season in Bundesliga, playing a total of 2880 minutes. 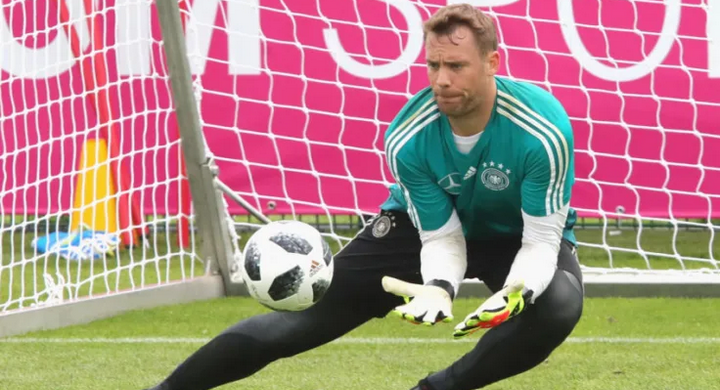 He concedes an average of 1.22 goals for every 90 minutes that the player is on the pitch.

Their Clean Sheets ratio is currently at 28%. That means Manuel Neuer has kept a Clean Sheet in 9 matches out of the 32 that the player has played in.

However, Manuel Neuer has drawn level with fellow Bayern Munich and Germany legend Oliver Kahn as the Bundesliga goalkeeper with the most clean sheets, with 204.

Jan Oblak  is a Slovenian professional footballer who plays as a goalkeeper for Spanish club Atlético Madrid and captains the Slovenia national team.

He is frequently ranked as one of the top goalkeepers in world football. 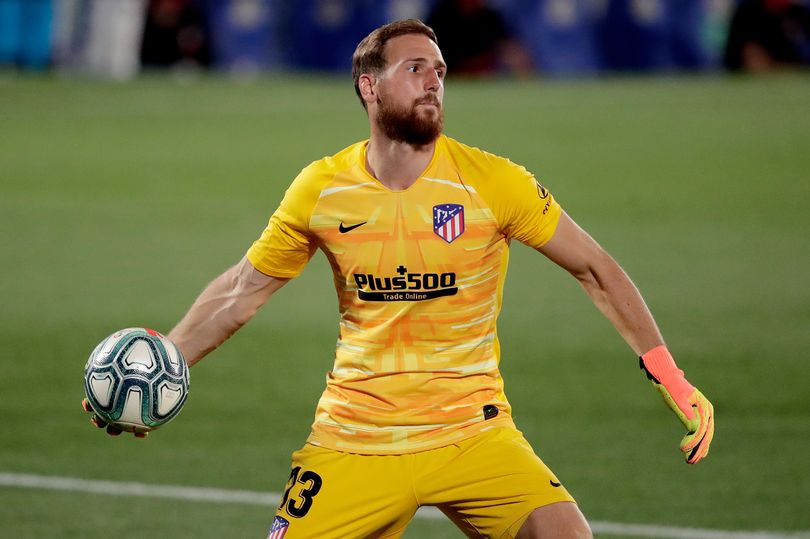 Oblak signed for Portuguese club Benfica at the age of 17, and was part of the team that won the domestic treble in the 2013–14 season.

He then moved to Atlético Madrid for a fee of €16 million, becoming La Liga’s most expensive goalkeeper at that time.

In 2015–16 he won the Ricardo Zamora Trophy for best goalkeeper, conceding an all-time record low of 18 goals.

He won the award again in the following three seasons. Oblak was also nominated for the 2017 and 2018 Ballon d’Or awards, following his consistent performances with his club.

With over 300 appearances for Atlético Madrid, Oblak has won three trophies with the club, including the 2018 UEFA Super Cup by defeating city rivals Real Madrid.

Oblak made his senior international debut for Slovenia in 2012, and has been named Slovenian Footballer of the Year on five occasions.

Jan Oblak is a Goalkeeper who has appeared in 37 matches this season in La Liga, playing a total of 3330 minutes.

Oblak concedes an average of 0.62 goals for every 90 minutes that the player is on the pitch. Their Clean Sheets ratio is currently at 49%. 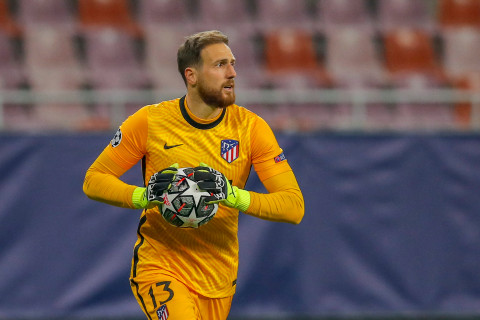 That means Jan Oblak has kept a Clean Sheet in 18 matches out of the 37 that the player has played in.

Jan Oblak scored a total of 0 goals so far this season in the league, which places them at 21st in the Atlético Madrid squad’s Top Scorers list.

Ederson Santana de Moraes known as Ederson, is a Brazilian professional footballer who plays as a goalkeeper for Premier League club Manchester City and the Brazil national team.

He is considered the world’s most expensive goalkeeper from a transfer value perspective by the CIES.

Ederson has been praised extensively by the media for his composure on the ball in high risk situations, ability to rush off his line and anticipate opponents who have beaten the offside trap, and remarkable ability to pick out accurate long balls to play through teammates. 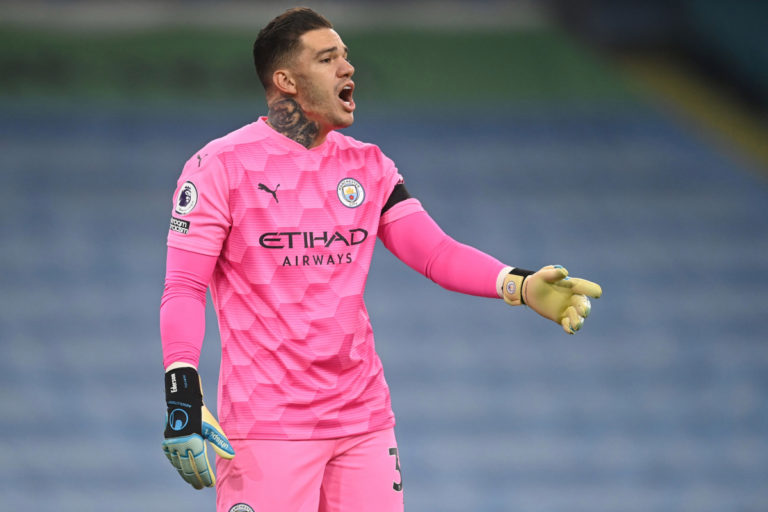 He is often regarded as one of best goal keepers in the world.

Ederson made his senior debut for Brazil in 2017 after previously being capped at under-23 level. He was chosen in Brazil’s squad for the 2018 World Cup and the 2019 Copa América, winning the latter tournament.

For the 2017–18 season, Ederson joined English club Manchester City for £35 million and became the most expensive goalkeeper of all-time in terms of the nominal value of pound sterling at the time of his transfer.

He went on to win the Premier League and EFL Cup in his first season in England, and won a domestic treble the following season.

Ederson is a Goalkeeper who has appeared in 35 matches this season in Premier League, playing a total of 3150 minutes.

Ederson concedes an average of 0.74 goals for every 90 minutes that the player is on the pitch.

Their Clean Sheets ratio is currently at 51%. That means Ederson has kept a Clean Sheet in 18 matches out of the 35 that the player has played in.

He currently tops the EPL with the most clean sheets as Chelsea’s Edouard Mendy is second to him.

Ederson won the golden glove in previous seasons and will hope to achieve the same feet with his current form as the season comes to an end.