The race for the Holy Grail continues with Chelsea, PSG, Manchester City and Real Madrid competing for the European cup.

Paris Saint-Germain knocked holders Bayern Munich out of the Champions League on Tuesday.

Eric Maxim Choupo-Moting scoring against his old club was not enough for the Bavarian side to proceed to the next round.

A 1-0 defeat in the second leg at the Parc des Princes in France could not prevent the French giants from winning a a blockbuster fixture quarter-final tie on away goals.

Neymar Junior twice hit the woodwork for PSG in the first half and Choupo-Moting then put Bayern in front five minutes before the break.

But the reigning European champions could not get the second goal they needed after losing 3-2 at home in the first leg last week.

Hansi Flick’s Bayern Munich team are out, and PSG have revenge following their 1-0 defeat in last season’s final in Lisbon.

The dream of winning a first European Cup remains alive for Mauricio Pochettino’s PSG team who are a Qatar-owned club. 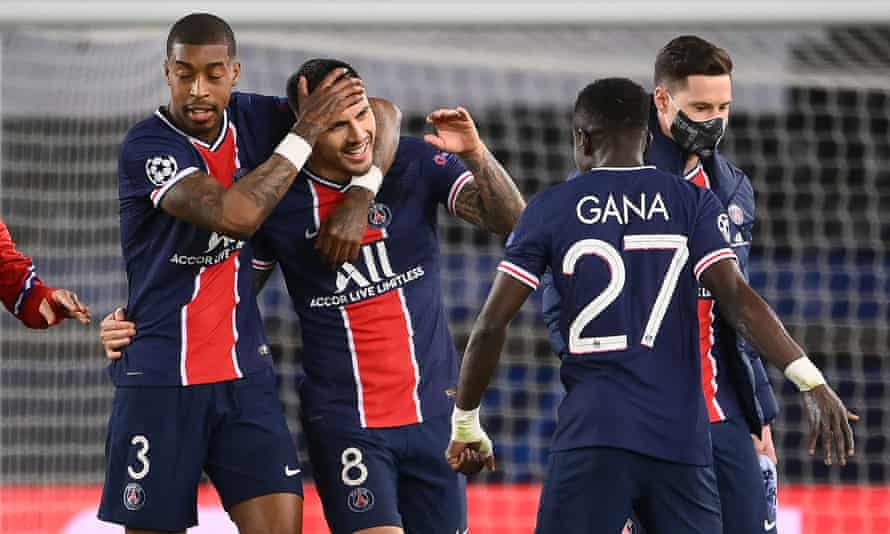 PSG celebrates as they proceed into UCL semi finals

They had already annihilated Barcelona in the last 16, can now look forward to a semi-final showdown with another Qatar-owned club, Manchester City.

Bayern Munich will have to commiserate with a 9th consecutive Bundesliga title. Also will wonder if they had their full squad in over the two legs.

Robert Lewandowski, Serge Gnabry were out for the two legs while Leon Goretzka was also out for the away game in France.

Elsewhere on the night, Chelsea reached the Champions League semi-finals for the first time since 2014. 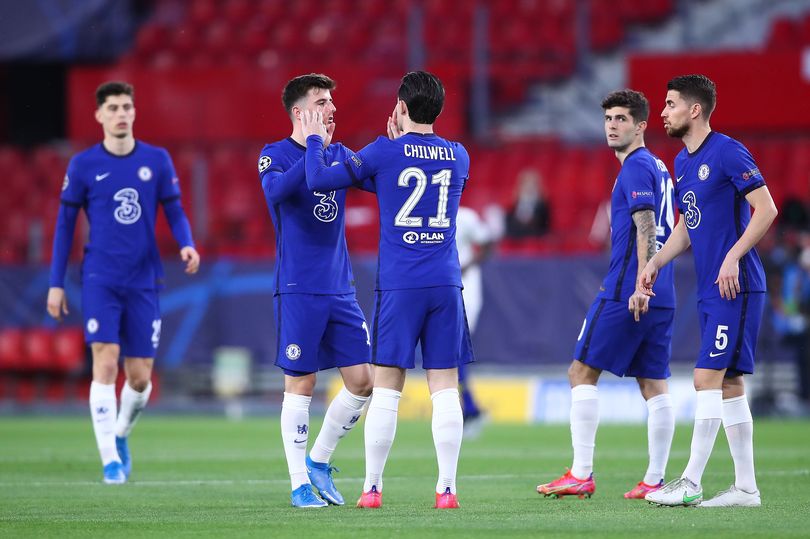 Despite a 1-0 defeat against Porto in the quarter-final second leg in Seville, they still qualify having doing the business in first leg with a 2-0 win.

Thomas Tuchel’s team defensive was intelligent until a stunning bicycle kick from Porto’s Mehdi Taremi made the difference in the last minute of stoppage time.

The astonishing strike that led to a goal was all Porto could get as they could not overturn the 2-0 deficit in first leg.

Chelsea’s coach Tuchel  have lost only once in 18 matches since he replaced the sacked Frank Lampard in January.

After cruising into the UCL semis, can now focus on Saturday’s FA Cup semi-final against Premier League leaders Manchester City at Wembley.

The Blues are fifth in the Premier League as they chase a top-four finish till the end of the season.

Goals from Riyad Mahrez and Phil Foden scores as Manchester City came from behind to defeat Borussia Dortmund 2-1 in Wednesday’s UCL second leg.

With a 2-1 deficit in first leg at the Etihad Stadium in England, Dortmund’s Jude Bellingham opened the scoring with a goal in the first half. 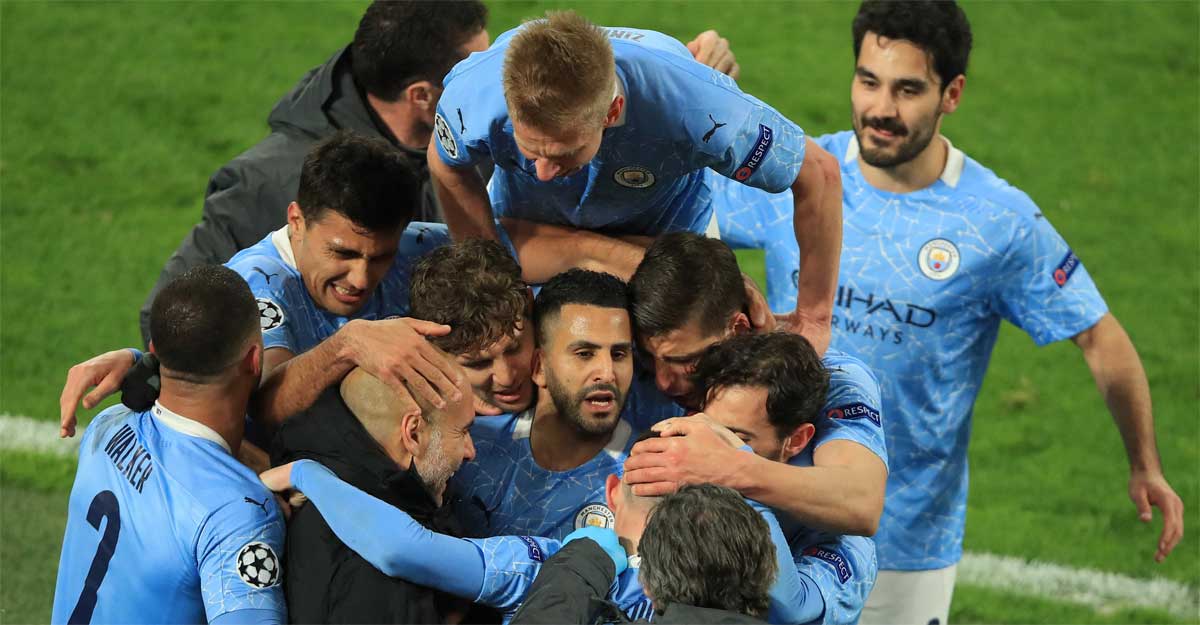 He makes aggregate score line to 2-2 of which if ended that way, Man City will bow out of the UCL quarterfinals yet again.

Fortunately, not this time as Pep Guardiola’s team comes out gun blazing with Mahrez scoring from the penalty spot and Foden’s strike to advance 4-2 on aggregate.

Madrid on the verge of another UCL trophy

Meanwhile, Liverpool at Anfield Stadium missed on alley of chances as Real Madrid held out for a goalless draw. 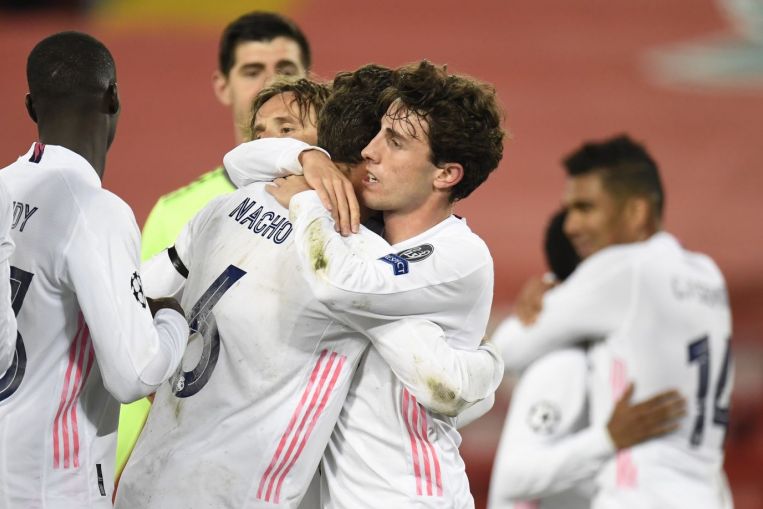 A draw at Anfield saw Madrid proceed to the UCL semi finals to set up play against Chelsea. While Liverpool were knocked out again by the Spanish side.

Liverpool’s Mohammed Salah and Georginio Wijnaldum were figure heads in wasting glorious opportunities to get Jurgen Klopp’s men back into the tie.

They failed to replicate a remarkable recovery from 3-0 down to beat Barcelona 4-3 on aggregate at the semis stage two years ago. Perhaps, due to absence of fans in the stadium to cheer up players.

Despite the empty stands due to Covid-19 restrictions, the England side flew out of the traps and should have halved their deficit within two minutes.

Sadio Mane knocked Ozan Kabak’s long ball perfectly into the path of Salah, but Liverpool’s one consistent performer in the final third this season fired straight at Thibaut Courtois.

Real Madrid are favourites to win but the night of UCL is always dramatic as you may never know what team to proceed and win the Holy Grail.