The Economic and Financial Crimes Commission (EFCC) have arrested and detained Rochas Okorocha, the then Governor of Imo state.

Head of Media and Publicity for EFCC, Mr. Wilson Uwujaren confirmed the arrest of Okorocha in Abuja to newsmen. 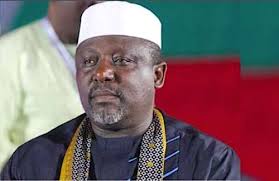 Meanwhile, the Special Adviser on Media to the Imo state former governor, Sam Onwuemeodo in a statement said:

The Commission arrested Okorocha weeks after operatives of the Imo State Police Command arrest the senator in February.

“the senator’s arrest was based on an old petition written by the Imo State Government. I don’t think EFCC has a new matter with Okorocha.

“Remember that after he left as governor, the (Imo) state government wrote petitions against him, the EFCC came and investigated this matter.

“The matter between Okorocha and EFCC has been pending in various courts, it is not a new matter,” he said.

“Unless they must have invited him to come and clarify one or two issues,” he added.

The senator was still being quizzed as of 8:24 p.m.