Residents and people of Gauraka community hits the road on Monday to protest the rate of kidnapping and insecurity along that area.

Protesters demanding that until when kidnappers releases their people would they yield to open the road.

They said kidnappers have been maiming and kidnapping people from the area.

Residents says it is becoming a daily occurrence to kidnap in the Gauraka community and they can not afford to pay financial ransom again.

Some of the protesters tells BBC Pidgin that kidnapping and insecurity as worsened over time.

This, to the extent that kidnappers do enter their houses anyhow to kidnap humans and no security to stop them.

Hence, protesters insists that government needs to intervene and help facilitate the release of their community people from these kidnappers, if not, the protest will not stop.

Meanwhile, soldiers appealed to them in order to open the road and make but the angry residents disagrees and refuse to listen. 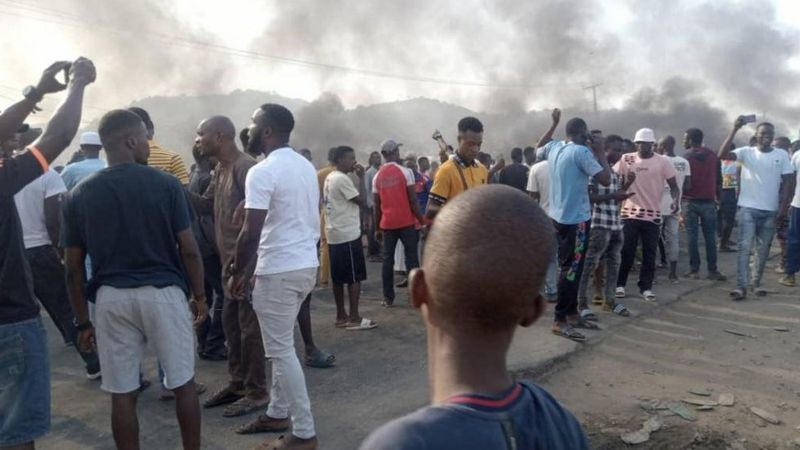 Therefore, this led to soldiers using force to pursue the crowd away from the highway.

The latest kidnap in Gauraka that caused the protest

According to reports, more than 30 people were kidnapped from the community from January till date.

Abu Jibril, who is likely to be part of the protests speaks with BBC Pidgin, said that he is not alright again because his son is among those kidnapped in the community late Sunday night.

Reports says over 10 people were kidnapped from the community between Saturday and Sunday alone.

Information circulated was that Boko Haram terrorists have entered into Gauraka Community.

This, after Governor Abubakar Bello announced that terrorist have raised their flags in some communities in Niger state in April.

Meanwhile, Gauraka community is about five kilometers away from Nigeria Seat of Power, Abuja.

See also  Guides to follow when selecting the right type of heels for ladies.

One of the community elder, Mukaila Popoola says, the Sunday night kidnap is the third major kidnap in two months.

He continued that they felt the government is not aware about the existence of the community as they did not take the plague seriously.

Mr. Popoola speaks further that the people want the government to help in the release of their community people.

He also added that the government should also move the barracks that is very close to their community.

Niger state have also come under serious attacks from bandits in recent times.

Reports says hundreds of people have died displacing thousands by rendering them homeless but not hopeless.