The Judiciary Staff Union of Nigeria (JUSUN) commenced strike in early April, and have set to protest in government main buildings in Abuja on Monday.

This is due to Federal Government shunning the meeting that was scheduled between staff union and FG, which infuriates the Union.

The judiciary and all judicial activities such as courts have been crippled since April 6, 2021 When JUSUN strike started.

Government representatives and the leadership of the striking judiciary workers scheduled to hold meetings on Thursday 15th April but postponed the meeting.

State governors under the umbrella of the Nigeria Governors’ Forum including the country’s Minister of Labour, Chris Ngige that ought to be present for the meeting did not give any reason.

A JUSUN official tells newsmen that they will still go ahead with the planned protest to the Federal Court of Appeal and National Assembly complex in Abuja.

Meanwhile, soldiers blocks aiming to prevent JUSUN from marching to the parliament building on Monday.

Treasurer of the Union, John Musa Alonge says the Minister of Labour later called the Union leaders to schedule a meeting to hold on Tuesday, 20th April, 2021.

The Union says it will decide to calm rising tension so as to allow enforcement of constitutional provisions. 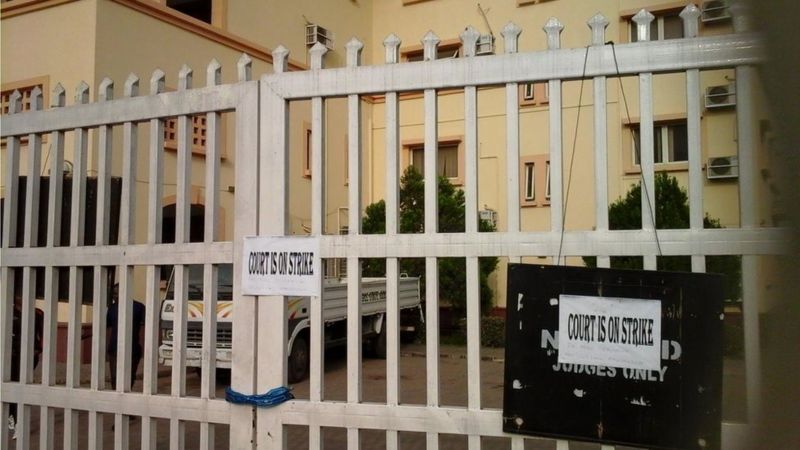 Also, to allow court judgements to grant financial freedom to the judiciary at state and federal levels, say that is one out of other demands.

The Union also got irritated due to the states allocation for Judiciary that does not get to them directly and alleged state governors’ being responsible.

Unlike the federal level, judicial officers have their allocation directly from the courts head.

This is the reason JUSUN is agitating for financial autonomy so that funds will not pass through the governor or the executive arm of government.

Mr. Alonge outlines other demands by the union which includes:

With the effect of the strike, the treasurer apologizes to Nigerians as the strike is for the good of everyone in the nation.

Speaking further, he says that is the reason they decided to hold a peaceful protest and plead with Nigerians to be patient with them.

If after the meeting with government, and a better conclusion or decision could not be reached, the strike continues till further notice.