The presidency has reacted to Zlatan Ibile’s tweet where he mocked the latest update of the surge of coronavirus in the country.

On Sunday, April 19, 2020, the Nigeria Center for Disease Control took to its Twitter page to announce the latest update on the cases of coronavirus in the country.

It didn’t take long before Zlatan reacted to the tweet with several laughing emojis. 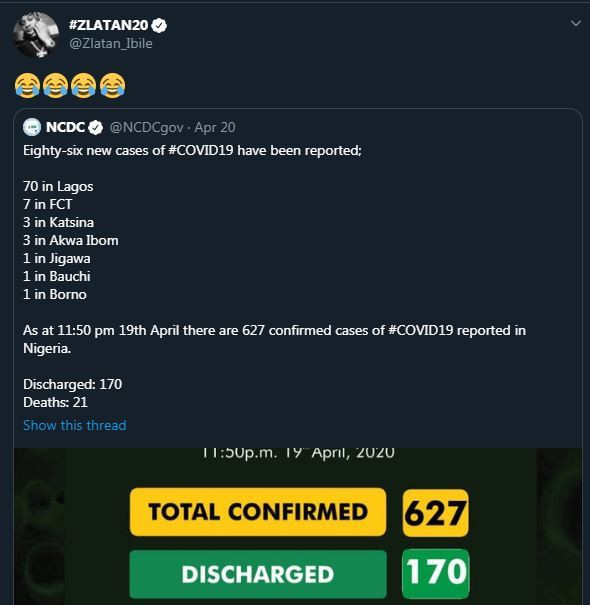 This, however, drew the attention of the presidency as the personal assistant on New Media to President Muhammadu Buhari, Bashir Ahmad replied the singer.

“Zlatan, as President Buhari stated in his national broadcast on April 13th, ‘this is not a joke, it’s a matter of life and death,” he tweeted.

Shehu later responded saying the reason he reacted to Zlatan’s post was because of his status as a celebrity.

“I can see some people are angry with my reply to Zlatan’s tweet, which he made a joke out of NCDC’s last night update on #COVID19Nigeria. I didn’t reply him as Zlatan, I replied him as a celebrity, who has hundreds of followers. Again, ‘this whole #COVID19 issue is not a joke,” he wrote.

It is not the first time Zlatan will be mocking or denying the existence of the virus.