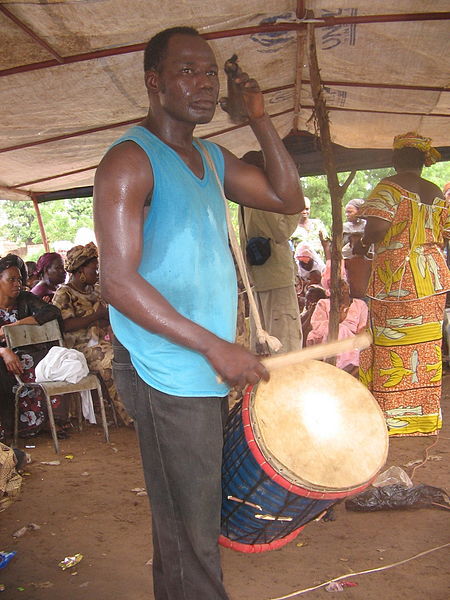 The Yoruba people are noted for their great culture and traditions. Their socio-religious life is defined by language, traditions, beliefs and practices.The Yoruba tradition, though a serious affair, is full of playfulness, rich contemporary music, graceful colors,to alleviate the drudgery of normal life ,Yoruba people of the southwestern part of nigeria love drumming as part of their vital cultural heritage.The Yoruba believe that God manifests in all elements, especially the supernatural energies of nature.it is believed that there is a major link between the higher power which is the Supreme Being(God), the local deity, a nature deity or a deceased ancestor.

The connection of the drum(ìlù) to the environment could be viewed through its symbolic representation attached to the tree. Yorùbá word ìlù is formed from two morphemes / ì+lù/, which is the short form of “the thing which is beaten?” (ohun tí a ń lù) .ìlù, to the Yorùbá, is an instrument that acts as a speech surrogate ,the Yorùbá refer to ìlù as “the talking drum”. The tree is a natural object that harbours spirits in Yoruba understanding and it also serves as materials for making the drum(ìlù).

Àyàn also refers to any Yorùbá traditional and professional drummer, who plays the drum (ìlù),The Yorùbá professional drummers share the name àyàn with Òrìsạ̀ Àyàn since they are the human agents who play the drums (ìlù), emblem of Òrìsạ̀ Àyàn, and through which the deity speaks ,It is said that Òrìsạ̀ Àyàn particularly prefers that ìlù be carved with Cordia millenii (igi òṃò) , a belief that gave birth to the Yorùbá saying, “out of the entire wood species of the forests is the preferred Cordia millenii, with which gbèḍu drum is carved”

See also  The importance of the French language

The relevance of drums to deity and traditional festivals in Yoruba land is important, during the osun festival, as osun is an annual event which shows the importance osun deity has on the a central forefathers of the osogbo people.it is a celebration held in august of every year.the use of drum is very important because the drum influences so many ritual actions in words, singing and dancing. Different stages of dancing are noted during the day and people are overwhelmed by the performance exhibited through the influence of drum. The drums displayed during this performance are bàtá, dùndún, bèmbé and lots of other traditional drums brought by dancing troupes from different places. The most recognised among the drum for osun festival is bembe due to its sacredness the Olúkòrídí is the name given to bèmbé drum among the Ijesa people but referred to as bèmbé among the Òsun and Oyo people.

Ìgbìn drum is a sacred drum attached to the worship of the Òrìṣà (deity). It is made with the skin of Ìgalà (deer skin) and its link with snail (ìgbín) could not be overemphasized. Ìgbìn as a drum identifies itself with many òrìṣàs that are worshiped with ìgbín (snail).Ìgbìn drum is also attached to the worship of Ògìyán deity. Ògìyán is the name given to Ọbàtálá in Ejigbo. Oḅàtálá is also called the great/superior deity.Ògìyán is a festival celebrated in commemoration of Ọbàtálá and the new yam. The adherents must usher in the new yam with the worship of Ògìyán and must not eat yam until after the celebration. During the celebration, kolanut and snail are used for the worship.
Dundun drum is also used to pacify the deity “oranfe” which is peculiar to the ife people,it is believed that the god is expressing his wrath when there is heavy rain that involves lightning and storm,the Àyàn drummers are recognized because they help to communicate with the god through their drum. The praise name of the god is sung through the drum to pacify and calm him.The praise names of Oranfe which are communicated through the dundun drum are stated as follows:
Onílé iná The lord of the house of fire
A da’niji One who causes sudden fright
Iná òsán Noonday fire
Iná gun orí ilé fẹ jú Fire that mounts the roof and becomes glaring flame
Èbìtì ré fìrì se gbì The murderous weight that strikes the ground with a resounding force.

See also  The high and rise of ankara

Ìpèsè (also ìpèsì) is the drum ensemble of the ifá priests (babaláwo), which they play during the ifá festival (Oḍún-Ifá). The drums are also used at the burial rites of any of their members. The ìpèsè drum ensemble comprises of three drums, namely, ìpèsè, the largest in the set, which can be up to six feet tall. Aféré, next to ìpèsè in size, is about three feet tall but is wider than ìpèsè, and nally àràn, the smallest in the set.ìpèsè are upright open-ended log drums with single leather heads fastened and tuned by wooden pegs.Ìpèsè, the largest drum in the ìpèsè ensemble, is played with a single unshaped stick and the palm, while the two smaller drums (aféré and àràn) are played with two unshaped sticks.

https://234gist.prestigenigeria.com/akwa-ocha-the-white-fabric/
The bata is also one of the important drums of the yoruba people.it is double headed and looks like a hour glass with one cane which is larger than the other it can be seen used during religion , carnivals and coronations events a set of bata consist of 3 drums of different sizes which looks similar in shape and the drums are played sitting down with the drum placed horizontally on the knee this makes it easier for the drummer to hit the drum with both hands.Bàtá drums are also used for religious music, especially in the cult of Sạ̀ngó, the god associated with thunder and lightning. It is said that when Sạ̀ngó was alive, he was believed to be a great magician who used the bàtá drum music as an important vehicle for his effective magic performance and acrobatic display. us, the Sạ̀ngó priests (onísạ̀ngó), who serve as the principal patrons of bàtá today, usually include displays of magic and acrobatic dance in their ritual performances.
When it comes to drumming and percussion in general across Africa and probably the entire planet, the Yoruba are the best,That is the reason behind the success of our polyrhythmic music which is the very foundation of modern Nigerian music of today.