The 2020/21 UEFA Champions League final will be held at Porto’s Estádio do Dragão on Saturday 29 May, with English winners assured as Manchester City take on Chelsea.

Manchester City booked their place in the season’s UCL final after winning in the semi final tie against Paris Saint-Germain.

The Blues beat Madrid 2-0 in Stamford Bridge to win the semi final (2) tie on aggregate.

The two clubs that reached this season’s UCL final are from EPL, meaning it’s an all English affair.

This season final of Europe blockbuster football competition will see a fierce battle.

As City who seeks to win their first ever title of the Holy Grail and Chelsea looking forward to add to their collection.

The UCL final will be played on Saturday, May 29 and the kick-off time will be 8pm GMT.

According to UEFA, 6,000 fans and spectators will be allowed in from each club into the stadium, no thanks to Covid-19 Pandemic.

Portugal is among the Greenland listed by UK, so players and fan can attend without need to quarantine.

Cityzens beat Tottenham 1-0 to clinch 4th successive Carabao Cup in April and on course went ahead to lift 2021 EPL trophy.

However for Tuchel, having take charge of the club as manager, the Blues have improved under him.

Thomas Tuchel qualify Chelsea for the FA Cup final but lost to Leicester City by 1-0.

The 2021 UEFA Champions League Final will be the 66th season of Europe’s premier club football tournament organised by UEFA.

It will also be the 29th season since it was renamed from the European Champion Clubs’ Cup to the UEFA Champions League.

The final is between English clubs Manchester City, in their first UEFA Champions League final, and three-time finalists Chelsea.

The home of FC Porto, the Estádio do Dragão (Dragon Stadium) is one of Portugal’s most iconic stadiums. 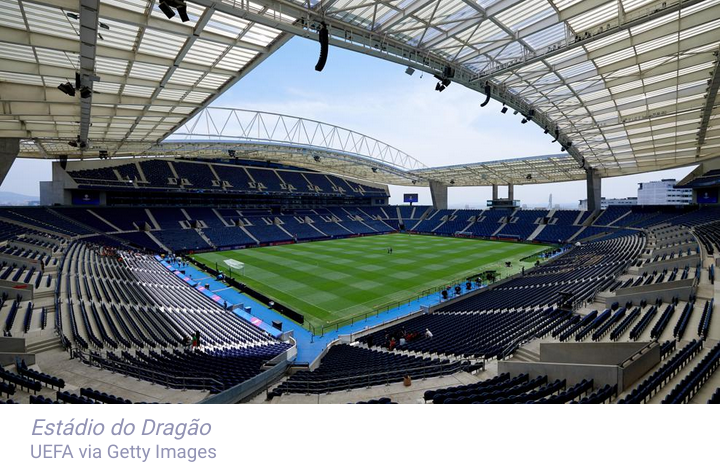 It staged the 2019 UEFA Nations League decider, when the tournament hosts defeated the Netherlands to take the inaugural title.

Built for UEFA EURO 2004, the arena opened in 2003 with a friendly against a Barcelona team featuring a 16-year-old debutant, Lionel Messi.

However, COVID-19 restrictions meant that on 13 May 2021, UEFA decided to change the venues.