President Buhari’s post thread of tweets of Tuesday in which he addresses insecurity challenges in the country.

PMB issued a stern warning to those who wants to destroy the country that “a rude shock awaits them, and very soon…”

The President discloses after he received a briefing from Chairman of the Independent National Electoral Commission (INEC), Professor Mahmood Yakubu, on series of attacks of the electoral body across the country.

“Many of those misbehaving in certain parts of the country were obviously too young to know the travails and loss of lives that attended the Nigerian Civil War.

“Those of us in the fields for 30 months, who went through the war, will treat them in the language they understand. We are going to be very hard sooner than later.” 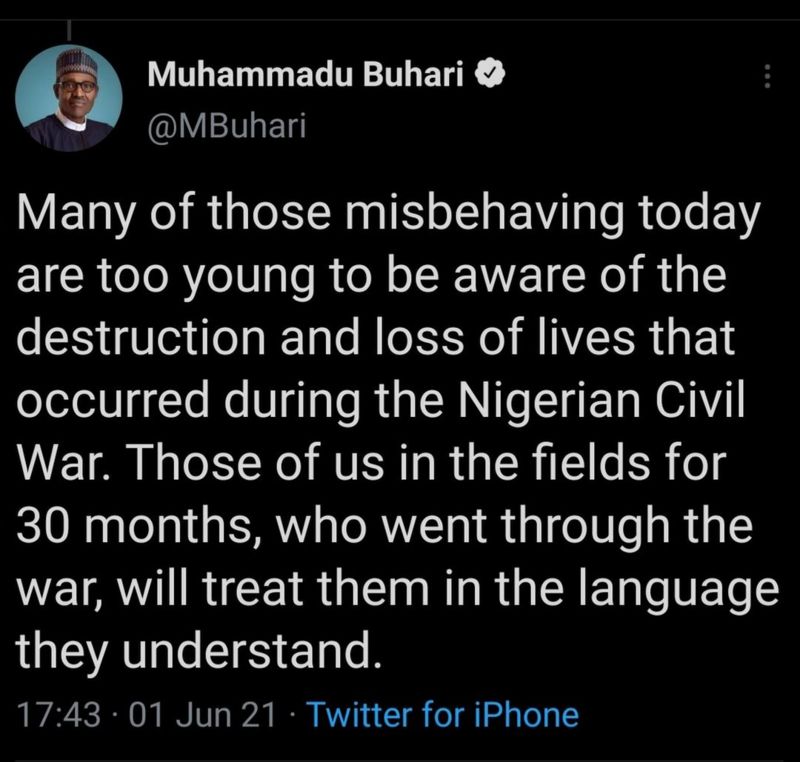 In response to Twitter’s action, the presidency asserts that the social media company in Nigeria is “suspicious”.

In a press conference on Wednesday, Minister of Information and Culture, Lai Mohammed asks if Twitter also delete the “violent tweet of the leader of the proscribed group – the Indigenous People of Biafra, Nnamdi Kani?”

“The same Twitter that was funding #ENDSARS protesters… When people were burning Police stations and killing policemen, for Twitter it was about the right to protest. But when a similar thing happened at the [US] Capitol, it became an insurrection.”

“Twitter’s mission in Nigeria, citing those two examples, is very suspect. What is their agenda?”

The Minister also said that Twitter is “the first to close account of former US president, Donald Trump.

“When people were burning police stations and killing police officers during #ENDSARS, for Twitter it was about the right to protest.

“But when a similar thing happened on the Capitol, it was insurrection”, Mohammed said.

Meanwhile, what are the Twitter rules violated by President Buhari?

It is not clear as Twitter directed to the company’s rules and why they can pull down any post.

“We will send email notification to the violator to identify the Tweet(s) in violation and which policy was violated.”

The social media company rule goes against any post that promoting violence, harassment and other similar types of behaviour.

“Our rules are to ensure people can participate in public conversation freely and safely.

“You can’t threaten violence against an individual or a group of people. We also won’t allow the glorification of violence,” they said.

This is not the first time the social media giant will flag the president’s tweet.