Madrid, who were home at the Alfredo Di Stefano humbled Liverpool showing their dominance in their first leg encounter.

The match started with attacking actions as Karim Benzema shoots from but Liverpool’s keeper Alisson Becker was in control.

Ascensio shots was also blocked by the defensive line of Liverpool. The Merseyside side also showed intent going forward but didn’t yield a goal.

However, Vinicius opens the scoring for Madrid at the 27th minute. 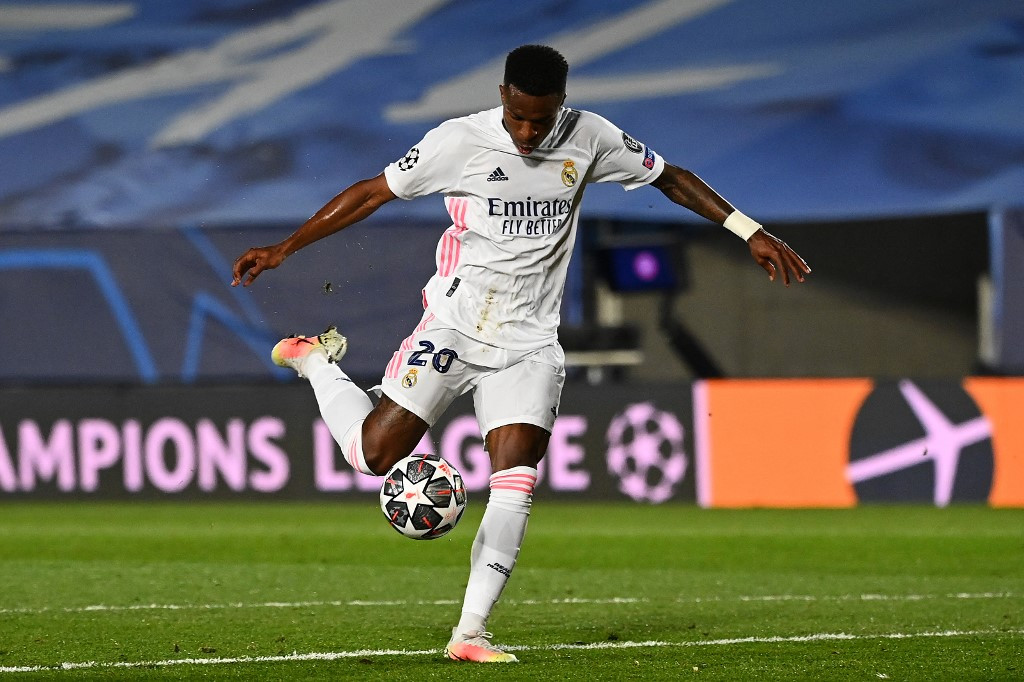 Vinicius fires into the back of the net

Toni Kroos with an instrumental assist who sends a long ball upfield to find Vinicius who puts it pass Becker in the back of the net.

A poor play by Trent Alexander-Arnold as his weak attempt to clear the ball puts his side under pressure. 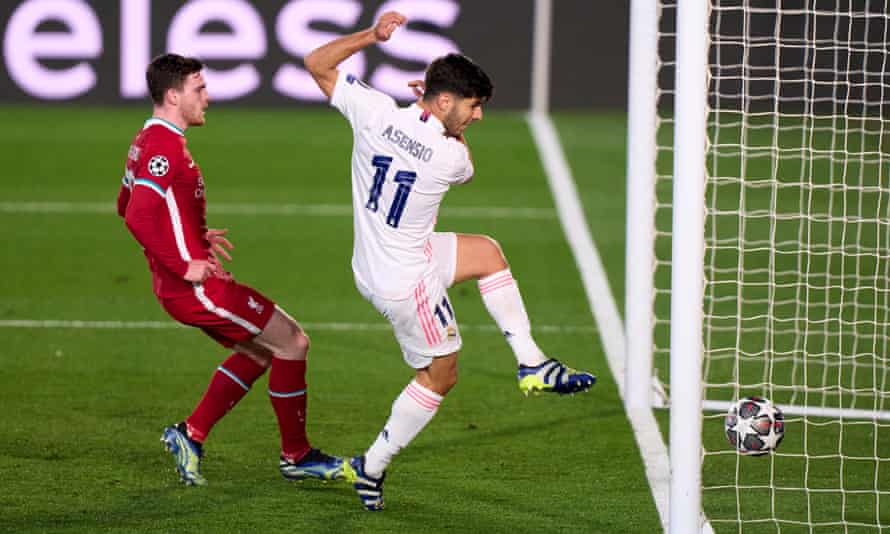 This led to Asensio finding himself in a 1 on 1 situation with the keeper, dribbles past his opponents.

He eventually taps the ball into an open goal at the 36th minute.

Into the second half, Liverpool soaked in enough pressure to open up the defensive line of the Los Blancos.

The Egyptian international Salah scores at the 51st minute. A vital away goal for Liverpool to make the score 2-1 on the night. 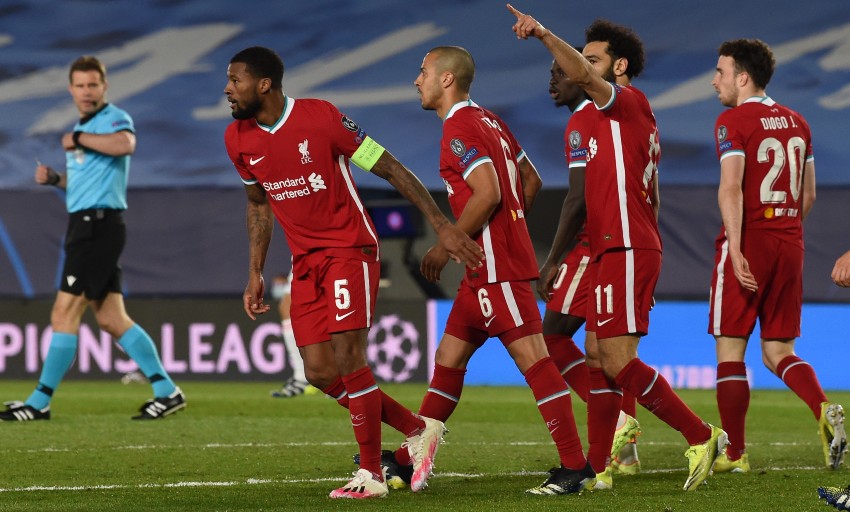 Salah celebrates with team mates after scoring a crucial away goal

The night wasn’t yet over with Vinicius as he got the second of the pulsating fixture.

Madrid started from an open play with a  throw-in at the right side of the pitch in the opponent’s half of the field.

Luka Modric of Real Madrid provides an assist for Vinicius who got his brace at the 65th minute.

Hence, Real Madrid with a deserved victory after a fine display wins the first leg of the match.

Jurgen Klopp the Merseyside Manager in a post match press conference said Liverpool must “earn the right” to progress to the Champions League semi-finals. 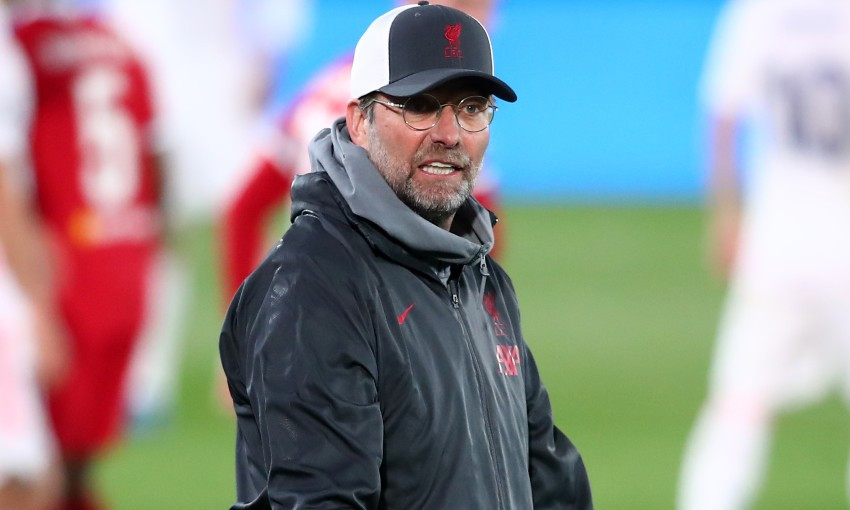 He said this after his side, Liverpool failed to win and play convincingly against Real Madrid on Tuesday.

“If you want to go to the semi-finals you have to earn the right to do so,” Klopp told BT Sport.

“We didn’t do that, especially in the first half, so the only good thing really that I can say about the game, apart from that we scored a goal, is that it’s only the first half of the leg.

“We just didn’t play good enough football to cause Real Madrid more problems. I really thought it would have been possible. We made it too easy for them, that’s the main thing.”

“We have to create, play better football and didn’t deserve a lot more tonight, one goal in the second half was okay, it gives us a lifeline.”

On other side of the coin Real Madrid head coach Zinedine Zidane on Vinicius Junior said:

“I’m happy for him because he needed to score, like Marco [Asensio] or Karim [Benzema] do.”

Zidane, took charge of his 50th Champions League fixture with his 31st victory.

Only Jupp Heynckes (32) won more of his first 50 managerial games in the competition than the Frenchman. 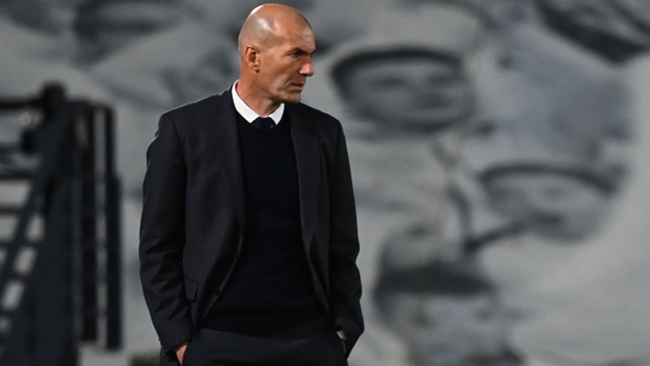 “He’s playing well, he’s helping the team and he gets a boost by scoring a goal.

“Vini was lacking goals and he’s going to gain a lot of confidence from today. He deserves it.

“I don’t know if it was his best game [at Real Madrid], but two goals in a quarter final is something very important.”

Madrid have progressed from 15 of their last 16 Champions League knockout matches after winning the opening leg, only failing to do so against Ajax in the 2018-19 round of 16.

In all European competition, no side has beaten Liverpool more often than Real Madrid (four, level with Benfica), with the Reds suffering defeat in each of the last four encounters with Los Blancos.

Zidane added: “We haven’t won anything. We’re happy with what we’re doing. What the players are doing is tremendous considering the difficulties we’ve had.”